The boy had a mouth on him.

He was the shortest, darkest, angriest trumpet player I had ever seen. Furthermore, his embouchure (through no fault of his own) had never been properly set and his tone, well, that’s what happens when your embouchure hasn’t been set right.

But, there was something in him. He had a deep, inborn sense of the good. He had principle. And, this combination produced a student of such determined commitment, a young man who put forth with every cell in his body to produce. I was merely the music teacher – a scant, 29 year old, belated second year fledgling – and this guy had convinced his impassioned concoction of underprivileged, underserved, and undertrained in the East High marching band to vote “Yes” to compete. I had my work literally cut out for me – by John Jefferson.

The first solution seemed to be a transfer to the F horn. This instrument’s conical bore mouthpiece would allow an easier tone production, in an alto range. John took to it. He learned the solo. I felt my first small triumph.

But, this, of course, was short lived. John spoke out. From the top tier of the bandroom at the end of the annex, he’d answer me back, in full on challenge, and loud enough for the whole room to hear. He was the alpha male, and I needed to know my place.

As for the next decision, I can remember neither the day nor the hour. I only knew that John needed to be out front. He needed to lead. And, that is exactly where I put him. By the end of his first season as a sophomore, John Jefferson was East High drum major.

The band did their absolute best. I always regretted that the association in charge of the competitions never produced a trophy for Most Developed Ensemble, because my kids deserved a big one. Nevertheless, led by John and his cohorts Shawn and Melanie, the students faltered not once. They just held up their heads .

John graduated from public education during my final year at his high school. The district would move me, against my will, across town to fill a vacancy, and I would never see either him or the rest of the students who would call me “mom” again.

That is, not until one, singular occasion.

Via the blessing of social media, I had been reunited with several former students. Naturally, one of the first to find me was John. Except that he had produced quite a life story – married, to Mindy, and the father of at least two of his three boys. But, about to realize more of that story, quite without warning I received news of an upcoming event: a 20th Class Reunion.

I’d been to several. In fact, every five years, my classmates from Academy High had dutifully taken on the enormous task of bringing us all together for dinner and more.

John didn’t just tell me about his. John invited Miss Scanzillo to the East High 20th Reunion of the Class of 1990.

He was hosting, he said. Would I please come? They would be honored by my presence.

To my memory, no teacher had ever attended a high school class reunion. Certainly none of my former teachers were ever present at any of mine – not the 5th, the 10th, the 15th….you get the picture.

The night of the event, I thought perhaps I should appear low key. Clad in a casual, soft summer top and capris, I slipped into Calamari’s Squid Row.

The doors opened into a full diningroom draped in white linen. A grand buffet spread across the front, covered in decorative stainless steel. And, presiding at the head of the long, formal room was: John Jefferson.

The red and grey drum major’s costume had been replaced by the dark woolens of the United States Military, Sgt Jefferson’s chest emblazoned with three rows of colored ribbon and precious medals. I was beyond stunned.

Finding a discreet seat at one of the table rounds, I set my gaze on our John. He spoke as loudly as ever before, but with a refined speech, a grace, and a carriage that made my heart well up. I couldn’t take my eyes off of him.

We kept in touch, after that. Facebook chat was a great place to convene, no matter where he was deployed. He’d check in, from Iraq, Afghanistan….and, always, the sign off: “I love you!”

See, something else had happened to John.

During the first year he and Mindy became a couple, they had both committed their lives to Jesus Christ. Now, not everyone will know what that means to those about whom such an act bespeaks. But, to the faithful, becoming a born-again Christian is what happened to John. This meant that, like my father before him, John accepted a life changing force into his heart. They called this the Holy Spirit, and to this Spirit’s direction and counsel both men would vow to remain true.

John and I continued, now familiar references to prayer and faith peppering his dialogue.

Life marched on, past another decade of Veteran’s Days. Twenty five more years, to be nearly precise. My adored father passed on into eternity, age 95, and I retired from public school music education. Then, word came to me that John and his family were coming back to Erie for another visit. Would I please join them all, for dinner?

Overjoyed, I met the entire family – at Chic-Fil-A. The boys were sweet, quiet (like their mother!) and polite. John talked of his travels and experiences, of meeting President George W Bush; I marveled. Mindy and I met, for the first time, that day – and, before we ate, John bowed his head and publicly asked the blessing for our food.

Last October, (could it be?) John had reached a life milestone. Now Senior Master Sergeant, he was set to retire from the US Air Force. Twenty six years of devoted service to his God and country. A full military ceremony was scheduled, at Scott Air Force Base in Illinois. On Facebook, the word went out as an open invitation.

It only took me a couple days to decide.

I flew in. Mindy met me, at the gate, to grant guest of family passage. High security, all around. Miles of real estate, devoted to air power, air men and women, and their commander. I was introduced to the latter, in the office where SMSgt Jefferson had been spending most of his time. A gracious civilian base employee chauffeured me all around the grounds, allowing me a few select photos.

And, then the ceremony. Getting a bear hug from John was the icing on the cake, or so I thought. But, then John’s colleague, a Major, stepped to the podium.

What followed was a litany of awards and accomplishments so vast that I could not contain the realization. John hadn’t just devoted his life to service; he had positively excelled. Officer of the Year. Medals for this, and medals for that. A contract officer, SMSgt Jefferson had, near as I could tell, managed millions of dollars of military monies over two decades of military action across the globe.

The celebration was surreal, a fascinating trek through life passing before one’s eyes. His insisting that I sit “with the family”, me stubbornly resisting that “order” so as to get my choice photos, I sat on the officers’ side. The formal presentation was followed by John’s individualized “thank you’s”. I received the final, single red rose, and words of gratitude which could only be overtaken by those of my own; this old music teacher just had to make sure everyone in the room knew that John had begun his career out front, directing the East High Marching Band. Always a leader, always an outstanding man, from the beginning.

Then, the final occasion.

Last week, I would receive the last of so many words on my beloved student, the boy who came closer to being my own son than any other child I would ever know. Inexplicably, after a mere two months of retired bliss and following a statistically innocuous routine medical procedure, John would cease breathing; efforts to revive him failing, his brain would swell; by sundown the same day, those in power would declare his brain death and, only hours thereafter on a vent and then off, at the age of only 45 his body would give up its ghost to the God of all believers.

This time, I could not attend.

John’s had been a life so worth celebrating; how could I even acknowledge his untimely and unacceptable death? My best effort was to sit, holding the single rose he’d presented to me, and weep.

The world had become, in large, increasing part, a frightening and sinister place for humans to reside. Nations, rising up against nations; holy wars fast becoming the order of the day. Addiction and apathy, married; deceit and treachery, lurching into the limelight; and, all efforts to revive hope, faith, and charity met by the darkest of demons.

Today, many a Scripture verse from the Book of my childhood speaks to me in solitude, along with the memes on my grandmother’s wall:

“For if thou shalt confess with thy mouth the Lord Jesus, and believe in thine heart that God hath raised him from the dead, thou shalt be saved.”

I hope to God it’s all true.

Because, if ever there were a voice on earth deserving of the realization of its passionately held convictions, that voice belongs to the soul of SMSgt John Jefferson.

And, I can still hear him. 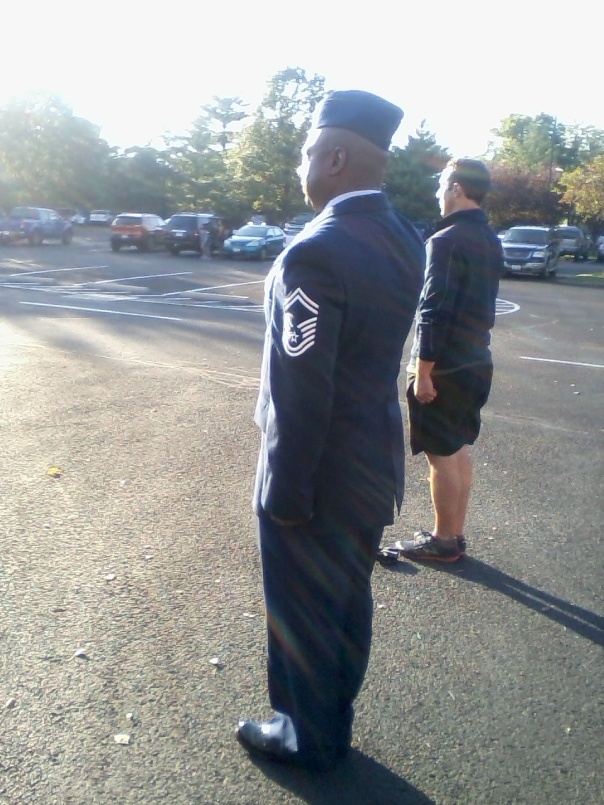 © 3/9/18   Ruth Ann Scanzillo.  This piece dedicated to the life and memory of SMSgt John Willis Jefferson, of Erie PA. All rights to its contents the strict property of the author, copied only by the author and shared with those who carry respect for its subject.