For more meanderings through the truth, and even some good music, feel free to visit RuthAnnTalks at the Tube.  Thanks. ❤

My boyfriend and I fight.

It’s no secret to the few who know us as a couple.

He’s a petulant Aries, insisting on running his own show (the only show); I’m a stubborn Taurus, refusing to be led by the nose, with – thanks to migraine med, Imitrex – a streak of OCD, just to pepper the picture.

Today, in the midst of what much of the world is calling the downward slope of the first coronavirus pandemic, our town spiked for the second day in a row and, with only as many contact tracers as tested positive, we’re in for some tenuous coming days facing Memorial Day weekend on the lake.

He was to have spent today with me, at my house. He’d take the truck to inspection by 9:30, walk the dog up State St, and get to his mother’s across town before I woke up. But, the truck service center had its own inspection schedule to delay so his plan, to dig weeds at her place, got protracted into late afternoon.

I’d made a stop over, to take him a small snack and a water bottle, then another and, by the time the case count had come in he was physically exhausted and I was fit to be tied – by floating anxiety. Did he know about ticks, in the overgrown foliage in the backyard? I did; been bitten and infected, at least once. Had he brought his hat? Would he take a couple disinfectant wipes, for the truck when it was done? Would he soap the dog, after?

Sheltering in place, between our two properties – his a spacious country idyll with gardens to till, mine a corner lot in the burgeoning hotbed known as Zone 1 – had felt like a workable plan. And, for about 34 days, it had been. He appreciated the change of scene and close proximity to his mother’s; I appreciated his share of the cooking skill, as close to five star Michelin as any man I’d ever known. Together, we’d weathered it better than our usual score; only two major blow outs, and a couple fleeting grouses. I was sure that, when this was all over, we could make a set of How To videos. You know, for couples. Who fight.

Today, he’d gotten stuck and so had I; his day would become about weeding and waiting, mine about wondering and fretting. Then, his phone died.

Being ten minutes apart is nothing, until the phone goes out. By the time the truck was ready, he had reached his limit of tolerance of everything imposing on utter fatigue, including and especially my increasing need for communication. Could I drive him to the dealership? Nope; not even that was within his scope of acceptability. Weren’t we going to spend time? Nah. Change of plans. His. Always his. His show, you know.

He’d called me pale, on my first stop in the full sun. I flipped through the rack and found my best red sweater. Perfect for a warm day without a jacket. And, for the first time in two months, a little under eye concealer and foundation with blusher fixed the aging face. No matter the double mask; I felt ready to present to my man, no matter his sweaty, foul moodshifting self.

Heading back out, I grabbed a can of coconut milk and the container of Clorox wipes he’d given me. We could spend our evening at his house, over a little dinner, and check on the laying hens and the lone chicken’s dog bite in the pen. The drive was one part compulsion, one part commitment; I wanted to finish this day far better than it had begun doing what had always worked for us, in the past – being together.

The drive was its usual 23 minutes beating all the yellow lights. People, everywhere, without masks, a troubling cloud over a beautiful sky. Reaching his driveway I was quietly amazed; the garage door, shut, empty of any vehicle – and, the trailer for bark nowhere to be seen. Hadn’t he planned on getting a haul? What exactly, was going on here?

I left the can of Clorox where he could see it, checked on the injured hen, and headed back into town.

This return trip was always an opportunity for clarity. I could face myself, head on. Compulsive obsession only overtook me under intense externally imposed stressors, and this virus lockdown had tested it mightily. On this drive, I mulled and pondered and ruminated; how could this relationship survive everything that had been happening to us? When would any notion of “re-opening” allow us to resume, and to what degree would we be forced to contemplate our future without it? Where was he, anyway, and why did he leave me adrift on such a lovely day?

Heading north on Cherry was always the final leg, a coast all the way to my street provided the lights cooperated. Now, what was this stopping traffic?

I braked, and peered around to find out. Horns, from behind me; a pickup, off the berm southbound, finally resuming speed. Nobody moving. I waited, for a siren, wondering how I’d heard nothing to provoke it.

Finally, the car in front of me turned out around. The big reveal was upon us all. Right in the middle of old Erie town, former industrial mecca turned faltering resort, and next to the newly glistening facade of our lone, enduring city high school was the biggest, fattest, black hog I’d ever seen. 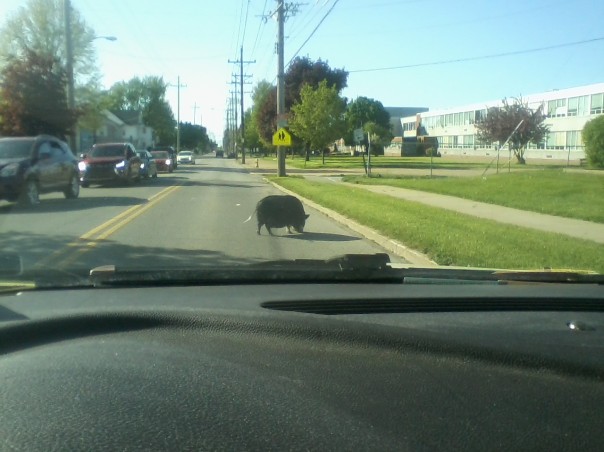 The thing had just taken two dumps, and was waddling in all directions, sniffing the unfamiliar asphalt wondering why nothing moved under its snout.

As soon as I could, I grabbed my phone for a capture, best possible in that lighting from the restrictive distance of the Pontiac hood, and then proceeded around the animal.

No sooner had I passed through the next traffic light, but this: a monstrously wide semi rig, backing for a turn right in front of me. 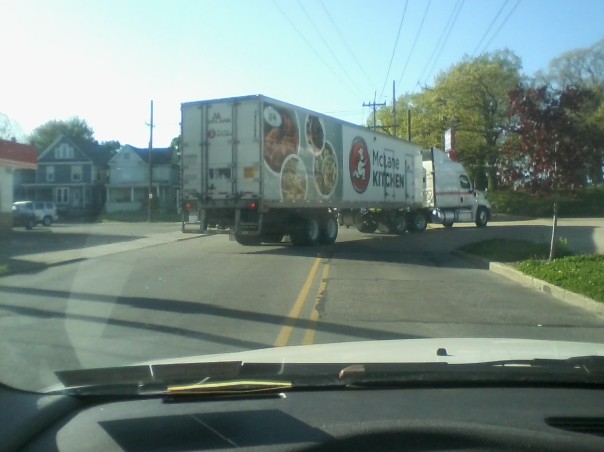 Yes. Apparently, even the convenience store had to take a moment during the coronavirus pandemic and refill its steam table. Stop, again; wait, again.

The next intersection was the top of the final hill. Its light remained red long enough for realization to gel. Even OCD and generalized incompatibility were no match for these two gems, little gifts of stopped time, levity in the midst of the grandest test of human patience and understanding I could recall over life as I’d come to know it. Perspective was the objective, after all; where would we go, from here, and who really cared if we did?

Surviving had become both the end and the means to it. Either we did that together, or not. But, better to avoid allowing any more roadblocks to reason, acceptance, forgiveness, and a reach toward unconditional love.

© 5/21/2020   Ruth Ann Scanzillo       All rights those of the author, whose story it is and whose name appears above this line.   Thank you for respecting the life of another.

Thoughts on preparing for another year of change. Take what you can use; discard the rest —  Much love, to all fellow bloggers and you, our readers ❤  Happy 2020!