The good teachers – the really good ones – don’t wait for rewards.
They’re usually too busy to market themselves to anybody. Anybody, that is, except their beloved students.

Such was the case with our Toni Dillon.

I’d met Toni at Lincoln Elementary, the big brick fortress on East 31st street where even my mother had been a student back in the 1920s. Having attended Lincoln myself, I was already familiar with the lay of the three floors, the hardwood, the massive stairwells, the big bay window in the largest Kindergarten classroom, and the steep auditorium whose stage was the lip of the gym. There were old school buildings all over Erie, but none quite like Lincoln.

Toni hadn’t grown up in our town. She was one of those special people who’d applied all around the country, and taken the first position that had opened up for her. Toni was from New Jersey, and probably one of only a handful of people from that state who had ever even been to Erie, Pennsylvania.

Newly bid into K-6 from the high schools, I was grateful to get one of the largest classrooms, an old art space complete with working sink, right across from the big Kindergarten with the bay window where I’d sat on the rug in 1962.

Toni was around the corner and across the hall, right near the door, and she had a whole wall of windows. Her students were the Emotional Support kids, boys, ages 9 – 11. Her room wasn’t huge, but it was packed with everything imaginable.

She had live critters everywhere, and growing things, and gizmos, and collections, and graphics, and all sorts of new activities to do every week, which she called her Projects. And, nobody was more enthusiastic about the latest Project than Toni, herself.

You could not contain your own energy when Toni was around. She was a whirlwind. She had to be; her boys, some of them fragile, many of them potentially volatile, needed her keen, undivided if indirect attention at every moment. And, Toni made it her mission to keep that attention, from the moment they passed through the door in the morning until they were safely on the bus at 2:30.

The reason I got to know Toni was all because of her personality; not a natural mixer, I was content to stay in my space. But, she loved to pop in, with an old filmstrip series found in a forgotten closet that she was sure I could use, or some other such reason to make contact. She called me RAZZ, a moniker I frankly enjoyed because, well, Toni “got” me; I, too, was enormously enthusiastic about my job as music teacher and, during those five years at Lincoln, probably the most committed and immersed in my role as I ever had been before or since.

The most admirable aspect of Toni was revealed to me the day she told me about her trips to the circus, with the one child in her class whom she had discovered to be essentially without family. This young boy, a slight little child with curly brown hair, had become a focus for Toni. Way beyond the call of duty, she had become a major part of his life. And, she did it simply because she was needed. Nothing ever stopped this woman from caring. Nothing.

The winter following my mother’s death, I’d spent Christmas day with almost everyone in my family except, of course, mum. The day was fractured by miscommunication. And, I, without going into detail, had been deeply hurt by the actions of my unwitting family. Running home to throw myself into bed and wail from the depths of grief and loss, I became quite hysterical and felt frightened by my despondency. I knew I needed to talk to somebody.

Toni was the first person who came to mind.

When I called her, she was actually home. And, she picked up. And, she listened. Toni listened, and let me cry it all out, and shared in my hurt and pain. She’d had similar experiences in her own family, as it turned out, and understood acutely everything that had just happened to me.

I never forgot that day. She may very well have saved my life.

As we proceeded through our teaching careers, forced to submit to the district’s bidding process, we were both moved out of Lincoln the same year, torn from students who had become such a part of our lives. Fatefully, the two of us ended up at Perry School, once again just down the hall from each other. And, for five more years, I was blessed again by her enormous heart.

But, the district would re – pair the schools, yet again, and this time I had to make the gut wrenching decision to leave Perry School. So, Toni and I were separated for the first time in nearly a decade.

Like too many teachers who had worked in those buildings, Toni had been diagnosed with cancer. She’d battled back, but this time the disease had moved further into her body and the fight was a full on suit of armor. We stayed in touch via email, Toni putting us all on a long list of friends and colleagues and, in true Toni style, mincing no words in describing her latest treatment plan and its progress.

For ten intense, exhausting years, Toni battled. Her goal, every year, was to get back to school. She needed to be with her students. And, somehow, she’d get through every day, sick as a dog, pushing, pushing, making it always, somehow.

Her funeral, just a few days after her 50th birthday, was impossible for all of us. We weren’t supposed to lose this woman. She’d been an Amazon of strength, of positive, up beat, fully open energy. She was always out there – kayaking (kayaking?!); befriending everybody at the Erie Zoo; mailing huge shipments of Care Packages to the soldiers in Iraq from, of course, her students (we’d met in the Post Office, the day that happened); supporting student efforts in the community, everywhere; and, even finding time to pay her respects to those who had passed (another bear hug, in the funeral home.) She was our Woman of the Year.

Toni died on Orthodox Christmas, January 6th, 2014. One of her dearest colleagues had made hologram ornaments for each of us, as remembrances; her face, and an angel, flickering back and forth, with her name on the back and the reminder: “Toni – an angel on earth, and now in heaven.”

I had saved mine on the secretary in the music room, amongst so many little things of sentimental value to me with which I could not part. Somehow, her face ended up propped against a mug and a Hallmark keepsake, between a tape measure, a ribbon, and a Sharpie, in random memorial.

This afternoon, I was in the midst of giving private Suzuki cello lessons in the music room. At one point, just after spending an intense phase of a session playing conductor to my newly appointed junior orchestra enrollee, I sat back down in my cello chair, to take a moment.

In that moment, I happened to glance over at the secretary.

There was Toni’s face, shimmering in hologram, smiling right at me.
But, right beneath her face, inexplicably, coming to me from the dimension where only Toni could reside, was the back of the tape measure upon which the ornament rested. And, this particular tape measure had extra room on its metric side, just enough for these words to appear, words which, at that moment, leaped out at me from across the chasm that separates us all from those who occupy the world which awaits:

As if that weren’t totally enough to transport me for hours thereafter, I vowed right then to capture this in photograph.

When I went for my phone, and aimed its lens at Toni’s face, the hologram had more to say. Instead of Toni’s face, all I could seem to get was the angel!

Frustrated, I pulled up my cello chair and sat, to stabilize my arm, thinking that all my excited trembling was causing the angel to phase over Toni’s face.

Amazingly, as soon as I sat, Toni reappeared, smiling impishly right at me.

I stood up. And, the angel, again, covered her face.

I could only see Toni unless I was seated, on my cello chair!

Toni was telling me something. She was reminding me that it didn’t matter if I was pushing 60. It didn’t matter that I had retired, and only had some 14 students now instead of 800+. As long as I remained devoted to them, both I and they would reach the goals we’d set together.

All I had to do was stay in my cello chair. Be the cellist. Make the music. Teach my students the cello’s music. Some day we’d all rise up; but, until then, Toni’s angel would watch over us all. 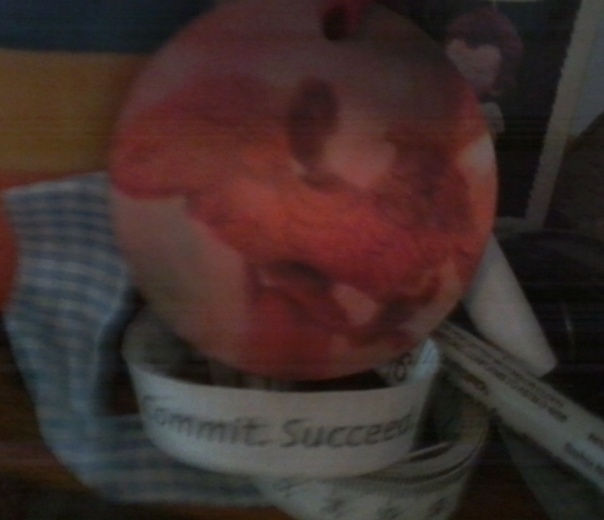 © Ruth Ann Scanzillo 9/12/16  All rights those of the author, whose story it is, and whose name appears above this line. Thank you for your respect – for Toni. ❤