Brody was a man of many graces.
.
He was humble, patient, gallant, and polite.
.
True to his two breeds, he could both bark and howl, but did both very selectively.
.
The Rottweiler in him was expressed rarely, but overtly: either hollering loudly at trucks which looked like jungle animals on the ride into town, or howling alone in the dogshed during the workdays when nobody was home, or gnawing territorially on a bovine knuckle. During the latter, his favorite pastime, he would snarl and growl so fiercely so as to resemble his pureblood sister, Bella. Together they would live out their primal instinct on those bones, often fighting over the one closest by.
.
But, the black Labrador in Brody gave him his sweetness.
.
This boy was tolerant. He needed no training. Always stepping aside, or waiting, just that much slower on the draw than impetuous Bella, he’d take his treats without biting.
.
Outside, he’d amble along. In the spacious country yard, he’d be the one to head to the pond, and come out smelling like everything in it. When we took both dogs to MudPuppies for their baths, I got to bathe Brody.
.
By the time I’d become part of his life, he’d already lived out most of his years. But, because I had fragile wrists and no short muscle, he was always my charge at the leash. He moved more slowly, and knew how to sit, and he endeared himself to me. I began to call him “mummy’s boy”, and every day I told him how good he was. He was such a good, good boy.
.
Women who have never had children, and never will, have a certain kind of love for the souls which belong to others.
.
Some become adoptive step parents.
.
Others become step pet parents.
.
I will miss my boy so much, my Brody Ode, because I loved him, too. 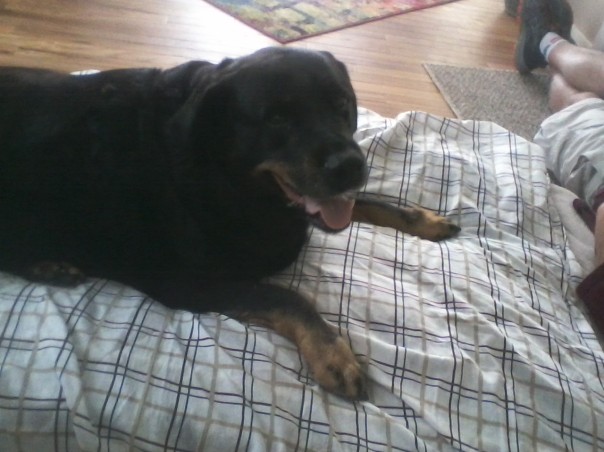